Which nations will be the winners and losers in the race for growth?

Potential economic growth primarily rests on the size of the working population and productivity, so a nation's future GDP can be projected reasonably well for the years ahead

Last month, I wrote about the growing divide between economic theory and real-world economic conditions, and reminded readers that economics is still a social science, despite whatever loftier ambitions its practitioners may have. Nonetheless, when it comes to the specific question of what drives economic growth in the long term, one can still offer rigorous predictions by focusing on just two forces.

Specifically, if one knows how much a country’s working-age population will grow (or shrink), and how much its productivity will increase, one can predict its future growth with considerable confidence. The first variable is reasonably predictable from a country’s retirement and death rates; the second is more uncertain. Indeed, the reported slowdown in productivity across advanced economies since 2008 is widely regarded as an economic mystery.

Is it really a mystery, though? Consider the following table, which shows GDP growth since the 1980s for the larger economies, the BRICs (Brazil, Russia, India, and China), and the “Next Eleven” (N-11) most populous developing countries. 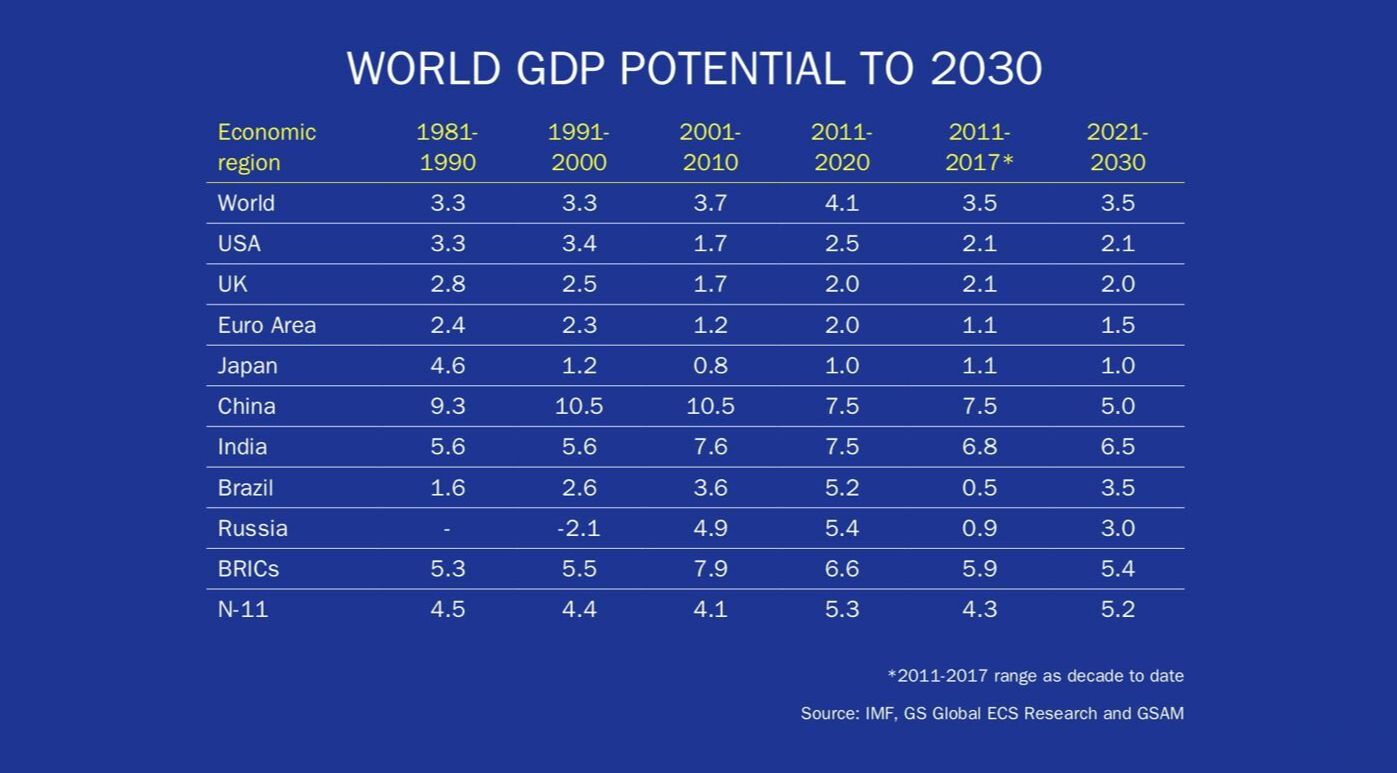 With the fourth column (2011-2020) showing what my colleagues and I had projected back in 2001 when we coined the BRIC acronym, one can observe differences between what was forecast and what has happened this decade (2011-2017*). For the world as a whole, we predicted growth of just over 4% in the current decade, owing to the rise of China and the other major BRICs. And it is precisely for that reason that growth in the 2001-2010 period was stronger than in the preceding decades, when the persistence of 3.3% annual growth led some economists to conclude that the global economy had reached its full potential.

Now consider what has actually happened. Growth in the United States, the United Kingdom, Japan, China, and (arguably) India has come close to what we predicted. But the same cannot be said for the eurozone, Brazil, and Russia, whose poor performance must reflect weak productivity, given that our predictions had already accounted for demographic trends.

It is worth noting that no major country or region has performed better than we predicted back in 2001. The table shows that there can be some asymmetry between actual and potential growth, and that such divergences are not random. On the contrary, the eurozone, Brazil, and Russia clearly have underlying problems that need to be addressed.

Of course, we also may have been too optimistic about these economies’ long-term potential in the first place. Such is the nature of a social science. Whether any of them can achieve strong productivity growth will depend on a variety of factors, not least the policies they have in place. At this point, it would be a pleasant surprise if any of them achieved the level of growth that we predicted for 2021-30.

It is also worth noting that the US and the UK registered growth close to the level we predicted despite their weak productivity gains, owing to the rapid increase in employment in both countries. But with the unemployment rate having reached near-historic lows, and with public policy turning against immigration, it will be mathematically impossible to achieve the same level of employment growth in the decade ahead. For overall growth to continue, productivity must improve.

When it comes to the next decade, much of the focus lately has been on China, whose current slowdown seems to have taken markets by surprise. It should not have. As we predicted almost 20 years ago, China will struggle to attain growth above 5% in the 2021-2030 period, for the simple reason that its workforce growth will have peaked. While pessimists will no doubt find validation in the further Chinese growth disappointments that are to come, optimists can point to the fact that 5% annual growth in China is nominally equivalent to 15-20% growth in Germany. At this stage in China’s development, faster growth would actually be quite extraordinary.

It is equally predictable that India will start to grow at a much faster rate than China, simply because its workforce still has a lot of growing left to do. The real question is whether India can implement strong productivity-enhancing reforms. If it can, it could be the one major economy to exceed expectations in the next decade. But even failing that, India will soon overtake the UK and France to become the world’s fifth-largest economy; it will overtake Germany at some point in the next decade, possibly by 2025.

Meanwhile, unless Brazil and Russia reduce their dependence on the commodity-price cycle, they will only ever experience strong growth during price spikes. With or without reform, Russia is already heading for another disappointing decade as a result of its demographics. Brazil, on the other hand, could register growth close to what we originally predicted if it could implement difficult social and health reforms. But that is a big “if.”

As for the eurozone, we appear to have been too optimistic, even though we foresaw a decline in potential growth to 1.5%. Nowadays, most forecasters put the region’s growth potential at around 1%. If Germany cannot shift to a more domestic-demand-driven growth model, that projection will probably turn out to be correct. Yet while most press coverage has focused on Germany’s falling exports and manufacturing output, the country’s services sector remains strong. For its own sake as well as for Europe’s, Germany should embrace that strength permanently.

Among the loose assortment of N-11 countries – most of them in Asia and Africa – are some fast growers like Vietnam. Others, especially Nigeria, have remarkable potential given their demographics, but will never reach it unless they undertake significant reforms. In that, they have something in common with many of the advanced economies.