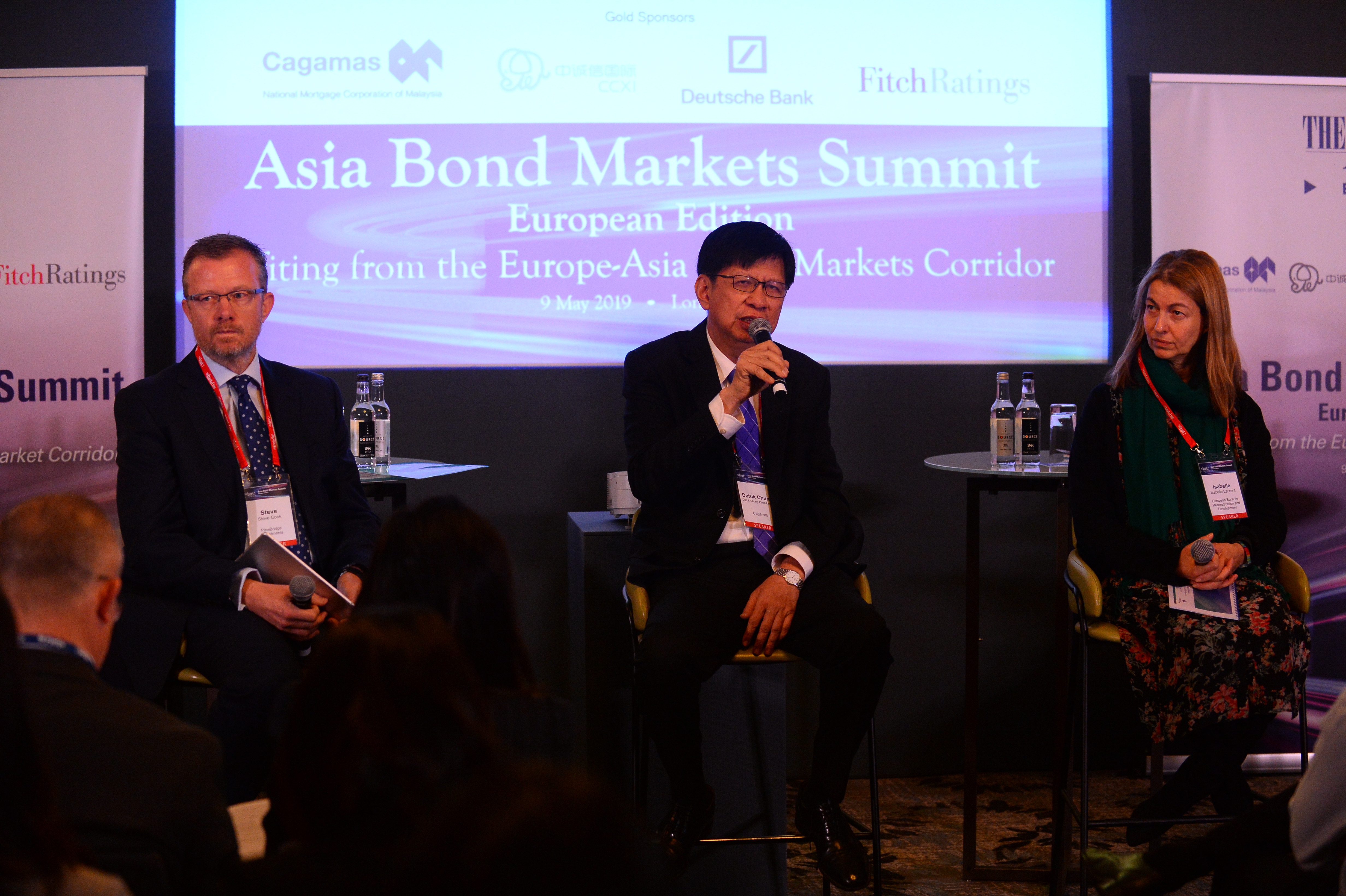 Datuk Chung Chee Leong, President/Chief Executive Officer of the National Mortgage Corporation of Malaysia (Cagamas), was in fine form as he breezed through Zurich and London to meet investors and speak at the inaugural European leg of The Asset Event’s Asia Bond Markets Summit (Profiting from the Europe-Asia Bond Market Corridor).

Just ahead of his European trip, Cagamas had announced that it had achieved its highest level of aggregate bond and sukuk issuance since the global financial crisis –15.8 billion Malaysia ringgit (US$3.8 billion) made up of 22 domestic issues and five new foreign currency lines.

That’s impressive for the agency, which is a frequent issuer of bonds, commercial paper and sukuk to finance the purchase of housing loans and receivables from financial institutions, selected corporations and the public sector. By providing liquidity to the country’s primary mortgage suppliers, Cagamas frees up capacity for them to engage in additional mortgage lending.

As a borrower, Cagamas is seen as a proxy for the sovereign. Its A3 long-term foreign-currency issuer rating is at the same level as the sovereign’s. In the domestic market, its bonds trade tight to government-guaranteed paper and through other Triple A rated local entities. Bank Negara, the country’s central bank, is a 20% shareholder and the government holds additional sway through its shareholdings in the country’s major banking groups and other entities that own the rest.

Cagamas regularly taps foreign currencies. As well as US dollars, Cagamas has tapped neighbouring bond markets, raising funds in Hong Kong dollars, Singapore dollars, Australian dollars and the renminbi. In August 2018, it raised S$65 million (US$47.33 million) in two-year money and in July it sold HK$351 million (US$44.72 million) in two-year fixed-rate notes as well as a US$28 million three-year fixed-rate notes. Its last sizeable public US dollar bond was in April 2017 when it raised US$350 million in three-year notes. Its debut dollar bond in 2014 – a US$500 million five-year bond – falls due in December this year.

Datuk Chung stresses the agency’s prudent approach to risk management. The agency operates on a match-funded basis to avoid maturity, interest-rate or liquidity mismatches. All asset purchases are funded by bonds of matched size; the allowable duration gap is six months or less.

Cagamas also seeks to extinguish foreign currency risk. “When we did our 2014 US dollar bond, we did a cross-currency swap for the whole US$500 million for the bond’s entire five-year duration,” Chung recalls. To signify the prudence of the approach: at the time of the 2014 issue, the US dollar-ringgit exchange rate was 1 to 3.45 but today it is 1 to 4.16.

“The decision to raise foreign currency or domestic currency bonds depends on the overall cost; if we can issue foreign-currency bonds and swap proceeds back into ringgit at equal or lower cost, we will look at non-domestic currency issuance. Last year, the split was 90-10; in previous years it’s been 80-20. It will vary,” Chung says.

“Foreign currency issuance enables us to diversify our investor base,” Chung says. “As a frequent borrower and the country’s largest bond issuer after the government, we also want to avoid a crowding-out effect in the local market with regard to less frequent issuers.”

Chung says Cagamas is opportunistic in terms of capturing price differentials in the capital markets, but not to the extent of pre-funding. “We wouldn’t consider issuing a bond just because it’s cheap to do so if we didn’t have an immediate need for the funding, because of the negative carry,” he explains. In practice, the match-funding principle eliminates the need for opportunistic funding.

Underlining its prudent approach to risk management, Cagamas maintains a buffer of liquid assets as a safety net against counterparties not paying promptly or other eventualities so it can always be in a position to pay bondholders on time thereby avoiding technical default scenarios. Liquidating underlying loans can take time, so staying liquid is a core precept. The liquidity ratio is kept above 1x, and the agency puts limits on the maximum shortfall against shareholders’ funds to ensure sufficient funds to meet maturing liabilities.

Chung highlights Cagamas’ active debt investor relations outreach, which is partly down to the need to remain nimble. “We provide liquidity to banks and banks typically want that liquidity quickly so our turnaround time is typically one week or 10 days at the most. If we don’t move quickly, we may lose the opportunity. A bank could turn around and tell us they no longer need the money, so we constantly conduct non-deal roadshows to keep investors up-to-date. When we need to issue, we can do so quickly.”

As the Malaysia story starts to improve, the questions Chung gets when he speaks to investors are changing. “In recent years, questions had been about things like 1MDB. As far as Cagamas is concerned, investors are interested in our profile, our shareholders’ profiles, our capital strength, our risk-weighted capital ratio, liquidity strategy and position, our asset quality, recurring profitability and prudent risk management. It’s an appealing story.”

At a corporate level, Cagamas continues to develop initiatives for sustainable growth and to tackle the challenge of affordable housing for Malaysia’s lower and medium-income earners. That is in keeping with its mission to broaden home ownership in Malaysia. The agency’s development role is critical; Chung says, adding that it is not just about maximizing profitability.

On housing, prices seem to have stabilised. “There had been sharp property price increases in the past, but the central bank has put in place various measures to cool speculation,” Chung says. “The market today is stable but there is still a mismatch between supply and demand. There is a lot of supply at the high end but a huge need for affordable housing. The new government is trying to put in place measures to address the mismatch.”

One of Chung’s priority agenda items is to come up with new structures or programmes, working in partnership with the government, aimed at promoting affordable housing such as shared equity schemes.

The fortunes of Cagamas are closely tied to the fortunes of the underlying economy. Here, the outlook is cautiously optimistic. The Malaysian economy grew by 4.5% in the first quarter of 2019, slightly below the 4.7% achieved in Q4 2018 but above forecasts. Bank Negara said private sector activity remained the key driver of growth, supported by firm growth in private consumption.

The outlook will be determined by a number of factors such as how the US-China trade war will unfold or other geopolitical flashpoints. Sentiment in global financial markets was a little volatile in May.

A critical input into the outlook will be the success of economic and other key policies under the year-old Pakatan Harapan Alliance of Hope coalition government. PH swept to power in May 2018, ousting the United Malays National Organisation (UMNO) that had ruled Malaysia since independence.

The new government set a record 2019 budget, incorporating a widening fiscal deficit. This is partially the result of dealing with irregularities in previous government accounts, partly the result of scrapping the GST, but also to provide funding for economic development.

It may take longer for the fruits of the new government’s labours – including a series of new fiscal measures – to emerge. Nonetheless, Bank Negara says it expects the economy to remain on a steady growth path this year, with baseline growth projected at between 4.3% and 4.8%, with core inflation stable.

“Investors have been cautious about the Malaysian market in recent months due to external and internal factors,” Chung says. “The government has taken steps to address the prevailing issues from the past and has been very transparent. We have started to see some foreign inflows on the back of the new policies being put in place. Sentiment has returned.”

Since the central bank effectively banned the use of non-deliverable forwards, short-term hot money is unable to put large leveraged positions on the ringgit. This has its benefits. “Malaysia doesn’t want to be overly dependent on foreign capital especially leveraged foreign funds because of the volatility it potentially gives rise to, but we do want to see real money inflows,” says Chung, who believes non-resident holdings of government securities are at reasonably good and stable levels.

“The recent announcement of the onshore dynamic hedging mechanism provides further flexibility for foreign investors to go through custodians and trust banks for their hedging needs. In addition to the existing Appointed Overseas Office, investors can also increase exposure on the ringgit beyond the 100% of underlying assets and the additional 25% position,” Chung adds.

The Asset Talk: What's been driving the acquisition finance market in Asia?